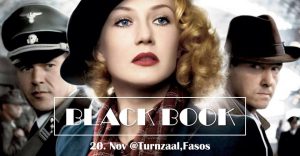 The third out of 6 movies from the movie series The past didn’t go anywhere, the series will continue for the next 3 weeks, introducing you to different aspects of the topic, by drawing on multiple filmic representations of totalitarianism.

Black Book shows the moving story of a young Jewish woman who joins the Dutch resistance against Nazi occupation. After her entire family is killed, Rachel assumes a new identity and works as a double agent in a Nazi SD group in The Hague. There, she uncovers a horrible plan with the help of a Zwartboek, a little black book, and gets tangled in a web of lies…
Based on real events and characters, Paul Verhoeven’s first European production stars Toneelacademie Maastricht’s most famous alumna, Carice van Houten, otherwise known as Lady Melisandre in Game of Thrones. The film was the Dutch submission for the Academy Award for Best Foreign Language Film in 2007, giving a great picture of a Jewish fate in the Netherlands.

First there will be a short introduction of the movie by a FASoS staff member, followed by the screening of the movie and a brief discussion.

The past didn’t go anywhere is an initiative by the Europe for citizens project E-WORDS (Europeans Win Ostracism: from Remembrance to a Dialogue Society), which is organised by the universities of Maastricht, Sienna, Krakow and Sibiu. At the moment, right wing and populist parties are gaining power all over Europe. To avoid repeating the mistakes of the past E-WORDS addresses young European citizens, to provide them with a sound understanding of the historical & political processes which led to the rise of totalitarianism in 20th century Europe (Nazi-Fascism in Western Europe, Communism in Eastern Europe) & the subsequent ostracism of many citizens.