The first film screening of the E-WORDS series was a success in Maastricht! 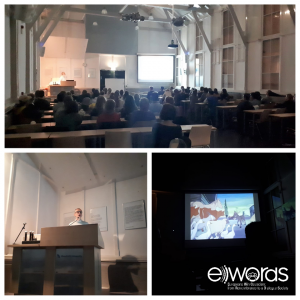 Animal Farm is a 1954 British-American animated comedy-drama film, based on the book Animal Farm by George Orwell. The film is set on Manor Farm, which is owned by Mr Jones, who lets the farm run down and neglects his animals. The animals on the farm revolt against Mr Jones and turn the farm into the “animal farm”, which is governed by the rules of animalism under which all animals are equal.Later, the pig Napoleon proclaims himself the leader of the animals, gradually installing more rights for the pigs and restricting the rights of the other animals even more. Eventually, the farm turns into a dictatorship run by Napoleon and the pigs. Orwell wrote the story as a reflection on the events leading up to the Russian Revolution of 1917 and then on into the Stalinist era of the Soviet Union. Even though the film seems light natured and almost childish, because it is an animated animal film, the film manages to show the serious topics of revolution, and the establishment of a new dictatorship very well. The film is very suitable to explain how totalitarian regimes arise in the first place.